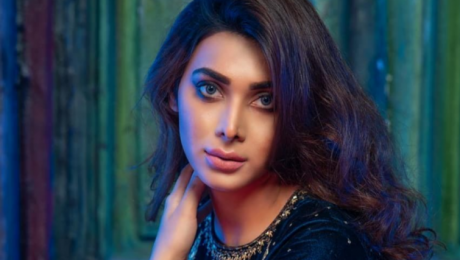 The glamorous Eshal Fayyaz is all set to star in an exciting new venture, opposite Ahsan Khan and Noman Ijaz.

The model turned actress has previously starred in Kaaf Kangana and Tabeer; and will be sharing the screen with none other than Udaari’s Ahsan Khan and veteran O Rangreza starNaumaan Ijaz in a thrilling new project.

Although details have not yet been disclosed about the upcoming film, it will be directed by actor and filmmaker Sangeeta, who has directed Tarap (2006), Sirf Tum Hi Tou Ho (2019) and Qayamat (2002),to name a few. The filming process will begin this December, leaving fans wondering what is yet to come with a star-studded cast and mysterious plot!

Eshal’s film debut in Kaaf Kangana was one to watch, with critics praising the actor’s brilliant performance, including director Khalil-ur-Rehman Qamar, who referred to Eshal’s performance as something the audience would remember for a long time to come. Now, with this intriguing new film in the works, the starlet will be showcasing her acting skills once again, with none other than two of Pakistan’s most famous names.

With Ahsan Khan and Naumaan Ijaz cast opposite the Abro actress, the film gives onlookers a promising glimpse of what can be expected as more details are slowly revealed about this sensational new project. 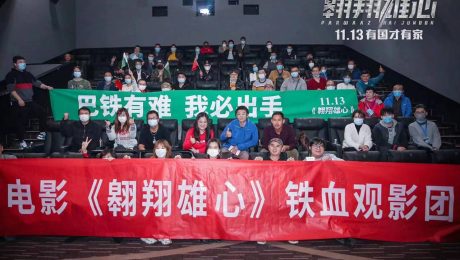 Momina & Duraid Films’ blockbuster aerial combat film, Parwaz Hai Junoon starring the very talented Hamza Ali Abbasi, Hania Amir and Ahad Raza Mir in lead roles premiered at the Wanda Cinema in Beijing, China. The commercial release of PHJ in China comes ahead of the 70th anniversary of Pakistan-China diplomatic ties. The JF-17 Thunder aircraft shown in the film is jointly produced by Pakistan and China which is a testament of the brotherly bond between the two countries and its people.

The premiere ceremony of PHJ was attended by Mr Moin-ul-Haq, Pakistan’s ambassador to China and other dignitaries. Speaking on the occasion, Mr Moin expressed his joy at the release of a Pakistani film in mainland China in over four decades and suggested that the Pakistani and Chinese film industry should work together to produce movies in the future. Commenting on the film’s storyline Mr Moin said that the film has action, drama, love, emotions and of course love for one’s country, and the sentiments and values are common to China as well.

Parwaaz Hai Junoon outlines the lives, relationships, challenges, duty and hardships of Pakistan Airforce officers and encompasses the roles, patriotism and courage of female fighter pilots of the PAF. Shot in some of the majestic locations of Pakistan, PHJ shows the scenic beauty of Pakistan which will leave an everlasting impression on its viewers and promote tourism. The film is set to release across China on November 13, 2020.

Eshal Fayyaz Signs Her Next Movie Directed by Farooq Mengal 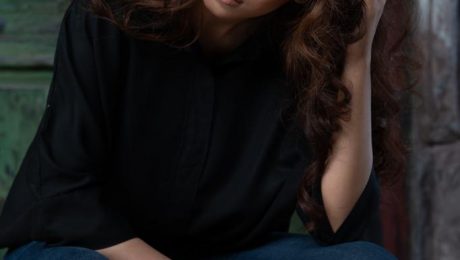 One of the fastest rising stars of Pakistan’s entertainment industry, Eshal Fayyaz is all set to take cinemas by storm with yet another massive project!
The standout starlet has signed her next movie and the film is being helmed by ace-director, Farooq Mengal who had previously directed Hijrat.
The shooting will begin July 25 under strict SOPs due to the on-going pandemic.
The title, cast, and story of the upcoming cinematic endeavor are still a secret and the team will be announcing it all with a mighty splash once all the details are finalized.
However, Eshal is elated over bagging the opportunity to work with Farooq Mengal and told the media that her role will be extremely different from what she has done earlier.
“I will remain tight-lipped for now as I want to keep my avatar a surprise for all. Nevertheless, I am extremely excited to be on board as it will be something diverse from my earlier projects and a worthwhile role to make it to the silver screen.”
This is not the first time the actress will be seen on the big screen. Earlier, she appeared across Sami Khan in KaafKangana, directed by Khalil urRehman Qamar.
She boasts stellar performances in dramas like ‘Aabroo’, ‘Tabeer’ and ‘Hatheli’. While she has a long way to go with immense potential, the starlet has proved that she is a force to be reckoned with! 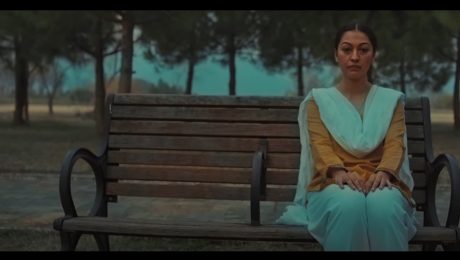 ‘Bench’, the dialogue centric short film directed by Usman Mukhtar, has released its trailer on Youtube on Wednesday.

A 1:46 minutes trailer features Rubya Chaudhry who is one of the lead roles in the film. In the trailer, Rubya can be seen walking towards a bench after purchasing two packets of cigarettes. Her character is giving a monologue to the audience about decisions she regrets one of which she aims to rectify.

Speaking to The Express Tribune, Rubya termed her role in the film as “An intimate dialogue between two conflicted hearts, looking to find their own truth in life.”

The actress related her role with real life and explained how difficult it is to take tough decisions. “It takes courage to make tough decisions, to force yourself out of your comfort zone in order to take charge of your destiny,” she said.

“Bench sets out to explore one such relationship; that turning point where you could either settle with the cards you’ve been dealt or break the mold to find your own truth,” she added.

On the other hand, Mukhtar revealed that the short film will be released sometime after the Covid-19 situation settles down.

“So we are somewhat in a state of confusion. So we are trying to figure that out. But yes the film will definitely be screened locally in Karachi, Lahore, and Islamabad once the Covid-19 situation settles down,” he said.

According to the leading news source, actress Sonya Hussyn has replaced Faryal Mahmood in the film Lockdown. The director and co-writer of the film, Abu Aleeha, confirmed the news.

Another source reported that the Enaaya actress says that she left the project because she wasn’t feeling her best and wasn’t up for a hectic shoot as yet. Also, the filming dates were not flexible for her.

Sonya will now play the role of the lead character alongside actor Gohar Rasheed. The reason behind Faryal’s abrupt withdrawal from the film is not apparent as yet. However, Abu Aleeha said she left for some ‘personal reasons’.

Lockdown will be produced under the banner of Mont Blanc. Reportedly, Asad Malik will be the DoP of the film. Abida Ahmed has written the script.

Most awaited feature film ‘Ishrat Made in China’ cast revealed 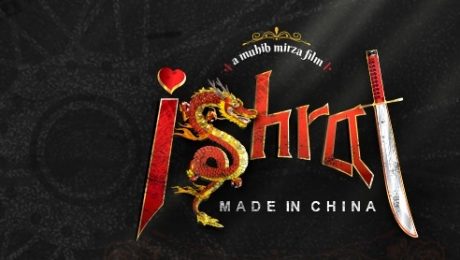 ‘Ishrat Made in China’, directed by Mohib Mirza is all set to release sometime in 2021 but to create some hype among the fans, the cast of the film has been released.

The debut film of Mirza as a director will be filled with action-cum-comedy set in China. The film has been shot in Thailand, whose plot is being kept under wraps at this time.

It must be noted here that shooting for ‘Ishrat Made In China’ was completed amid the COVID-19 pandemic. Earlier last month, the cast including Shamoon, Sanam, Mirza, and crew were stuck in Thailand following countries shutting down boundaries due to COVID-19 panic.

Baaji to be screened in the UK Asian Film Festival 2020 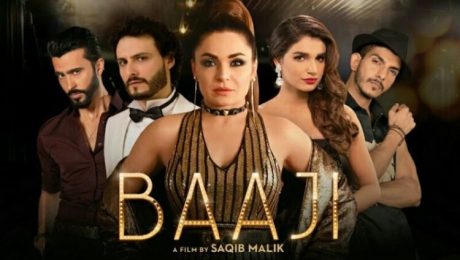 Saqib Malik’s debut film ‘Baaji’ will be screened at the UK Asian Film Festival 2020, in London. This is big news for Pakistan, as exclaimed by Meera Ji.

It is scheduled for screening on three different days in 3 different venues; at the Stockton Arts Centre on 27th March, followed by Strathclyde University, Glasgow on 29th March and finally at the Regent Street Cinema, London on 1st April.
The lead actress, Meera was quick to respond to this announcement. She used the opportunity to congratulate and praise everyone involved in the making of the Baaji.

However, it’s alarming that a screening has been scheduled amidst the Coronavirus pandemic. The official Instagram page of Baaji made the announcement yesterday.

This is also the first time that Baaji will be screened in Central London. 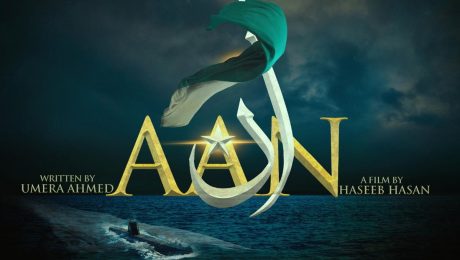 The renowned Director and Producer, Haseeb Hasan of Hamdan Films, is gearing up to bring another blockbuster feature film titled ‘AAN’.

The film features Fawad Khan in the lead, a world-renowned actor that lives in the hearts of many people. Fawad Khan is the biggest name in the Pakistan Film Industry who has not only gained a name for himself but also for our beloved country, Pakistan. The megastar will be seen in an avatar like never before.

Haseeb Hasan has many projects that are famous worldwide, one of which is “Parwaaz Hai Junoon”. A 2018 war-combat film that hit cinemas worldwide and won the hearts of millions. The film made the highest gross of 40+ crore at the worldwide box office and is set to be the first ever Pakistani film that will be released in China.

The new project, ‘AAN’ will be no exception. The script has been penned down by Umera Ahmed who has helped in turning this little dream into a big reality, with her exceptional writing skills. Some of her famous projects, amongt many others are, Zindagi Gulzaar Hai, Laal, Shehr-e-Zaat and Meri Zaat Zarra Benishan. “AAN” will also be featuring some of the best and intense dialogues that will leave your heart throbbing.

‘AAN’    is the epitome of naval warriors that packs romance and drama between the main actors. It also has a combat and touch of humor that makes it a complete package for the best cinematic experience. The film is set to start shoot in April with pre-set release date at the end of 2020. 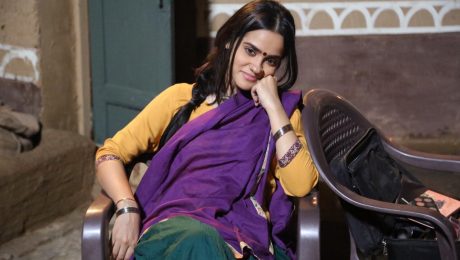 The talented young actress Rabya Kulsoom after proving her mettle on the small screen is all set to take over the big screens with her debut movie ‘Gawah Rehna.’

Gawah Rehna is set in the 1920s, against the backdrop of Khilafat Movement, which was led by the Muslims of South Asia, before Pakistan came into being. Starring alongside an ensemble cast, including the legendary actor Qavi Khan, Rabya Kulsoom will be seen in a totally new look playing a Hindu character who is the love interestfor the leading man in the film.

Talking about her big-screen debut, the actress said, “I couldn’t have thought of a more challenging role to begin my foray on the big screen. Portraying a Hindu was also a career first me me and I am really looking forward to everyone seeing this intense story when it releases !”

The film, written & directed by Tahir Mehmoud, has been shot in Gujranwala and is all set to release in both Pakistan and Turkey in 2020.

Rabya Kulsoom: This emerging young talent started in the industry in 2018 with a promising role in “Hara Dil.” With her acting skills and effortless ability, she managed to make her place on the screen in a small period. Though she has only just begun her acting career, she has already starred in various projects alongside veteran actors, including Dil Aara, Shehr e Malal, Meer Abru, and more.

Ali Rehman Khan starts shooting for his next film! 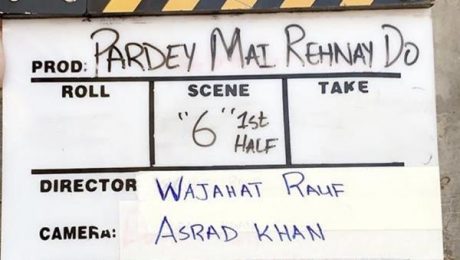 Titled “Parday Main Rehnay Do” the film is directed by Wajahat Rauf under his own banner Showman Films, and Ali will be playing the lead role opposite his Jannan co-star Hania Aamir.

Ali can currently be seen on the small screen on ARY Digital’s drama serial Bewafa that airs on Thursday nights.

Ali Rehman Khan: The famous film, theater, and television actor Ali Rehman Khan made his industry debut with the 2010 controversial film “Slackistan” and has made rounds in the industry for his edgy and unconventional choices of projects ever since. He then moved to the small screen and earned an award for his performance in “Rishtay Kuch Adhooray Se” in 2013. His more recent works include critically acclaimed and successful movies like Janaan, Parchi, and Heer Maan Ja, and dramas like Diyar-e-Dil, Main Khayal Hoon Kisi Aur Ka, Khaas, and Bewafa.