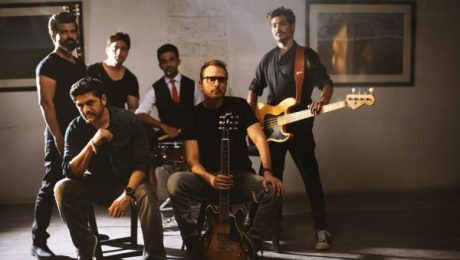 In 2018, during their ‘30’ tour, Strings did a concert in Karachi. After a few generational hits, few arrangements caused a bit of a delay, but the packed crowd was patient, unusually patient. Now, for a capricious Karachi crowd to get restless in what is a cramping space is not unusual. But here we were, rejoicing what this old-timer band had produced thus far and excitedly waiting to see the new and the old. Strings has this kind of hold on the audience. Whether they are telling a tale of swooning over teenage-like love, a deep meaning song about losing a loved one, or a simpleton’s anthem of hope, it all connects.

To map the journey of Strings is like looking back at Pakistan’s pop scene as a whole. Four young boys Bilal Maqsood (vocals and guitars), Faisal Kapadia (vocals), Rafiq Wazir Ali (synthesizer) and Kareem Bashir Bhoy (bass guitars) make a band. From their first two albums, Sar Kiye Yeh Pahar, to this day, remains one of their most popular songs. The band underwent what seemed like a break up at the time, but it was just a hiatus to come back stronger.

Entering back into the music scene, their popularity went through the roof with Duur and Dhani. In the next few years, they collaborated with Hariharan and Sagarika daCosta, signed an album deal with Colombia Records, sang the Hindi version of the Hollywood blockbuster movie Spider-Man, and struck a deal with Gibson Guitar Corporation. Their work in Bollywood was limited but outstanding. Staying true to their music, Strings with Zinda and Aakhri Alvida showed that Pakistani musicians don’t have to change anything to reach the very top in India. This was a period where Indian films had opened in Pakistan, the cultural exchange was happening. Strings again took the lead here.

Moving forward, the band who had performed in Coke Studio earlier, took a new role as the show’s producers. This was a new stage for the band. They stayed on for four seasons and helped produced numerous hits. Their value was beyond the songs they were producing. They had become the voice of hope with ‘Mai to dekhonga’. Taking on roles as brand ambassadors and representing Pakistan at the global stage, Strings were in a way the face of the country.

Their latest effort, their album “30” is a culmination of the work they have done over the past 30 years. The release of the last video, Raat Shabnami returns to a format the band has followed for a long time. Yet, it sounds fresh and engages you with its peppy tunes. In fact, all the songs of this album reflect the grip of the band over their craft. Once again, the band has captured the imagination of the public; young and old.

Strings started by selling cassettes, progressed to the CD/DVD era, then became Youtube sensations. Today, 30 will perhaps be most listened to on platforms like Apple Music. All through this journey, they have remained true to their values as musicians and as lyricists. In that perhaps lie the secret of their longstanding success. Beyond the global and national awards, the greatness of this band is how with every song, they connect with their fans.

As fans of music, we hope that Strings 30 is just the start of another phase of great music, because we can never get enough of Strings!